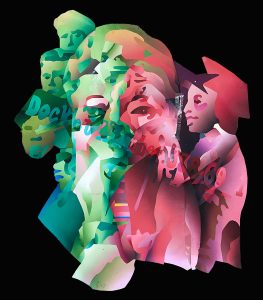 The three images are of Juanita Hopkins looking straight ahead, a choir from Booker T. Washington High School, and Docket Number: 338-69_1. The docket number is from the 1970 United States of America, Plaintiff-Appellant, v. Board Of Education, Independent School District No. 1, Tulsa, County, Oklahoma, et al., Defendants-Appellees.

This simple docket number signifies an epic battle on the part of Hopkins, the Oklahoma Eagle Newspaper, and the community. And as a result of that lawsuit, the U.S. 10th Circuit Court of Appeals declared that Tulsa schools were “a system of state-imposed and state-preserved segregation, a continuing legacy of subtle yet effective discrimination.”

Tulsa World
A Difference Made // Hopkins’ Teaching Influenced Many by Scott Schriewer – October 16, 1996