This virtual, one-day conference will bring together interested residents and an estimated 100 engineers, planners, and community officials from across Oklahoma and the region, to learn and share their expertise on a variety of topics including:

Our conference will connect your business to private and public-sector engineers and planners, as well as elected and appointed officials. It is more important now than ever to create opportunities to have dialogue and training related to equity in our streets. This conference will be held virtually in order to protect speakers and participants.

What’s it all about?

The City of Tulsa, like other cities around the United States, has historically planned and made infrastructure decisions in an inequitable manner, whether knowingly or unknowingly.

May 2021 marks the 100th anniversary of the 1921 Tulsa Race Massacre, prompting the City of Tulsa and the larger community to delve into uncomfortable conversations. One such inequity is in the implementation of transportation infrastructure. Our transportation infrastructure has exacerbated not only racial disparities, but has affected all vulnerable populations such as people with mobility issues or other impairments, young people, older adults, those without automobiles, and low-income communities.

These disparities are evident when visiting different areas of the city. For example, midtown Tulsa, one of the wealthiest areas of Tulsa, has much more bicycle infrastructure than the less wealthy areas of Tulsa whose residents have a higher percentage of households with 1 or fewer cars, indicating more need for bicycle infrastructure as a transportation method as opposed to recreation.

As part of this conference, INCOG and the Tulsa Planning Office will host speakers and roundtable discussions with professionals from across the country to learn what has worked in other cities and look at “lessons learned”.

We hope that public officials throughout the region benefit from the conversations and that the focus will highlight ways in which we can create public right-of-way that is safe for everyone, no matter your race, income level, ability, or age.

Our city is just beginning to heal, and acknowledging that not all communities have been included in the decision process of planning our public infrastructure is another step toward reconciliation.

We will demonstrate to attendees and practitioners that when everyone is at the table, our cities’ streets become safer and stronger.

Sponsoring the “Unraveling Inequity on our Streets” conference is a valuable way to show support for equitable transportation planning in Oklahoma.

In order to keep this important conference free for attendees, we need your help. Increase awareness of your organization and services by sponsoring.

For more information, contact Jane Ziegler at jziegler@incog.org or by calling 918-579-9427. 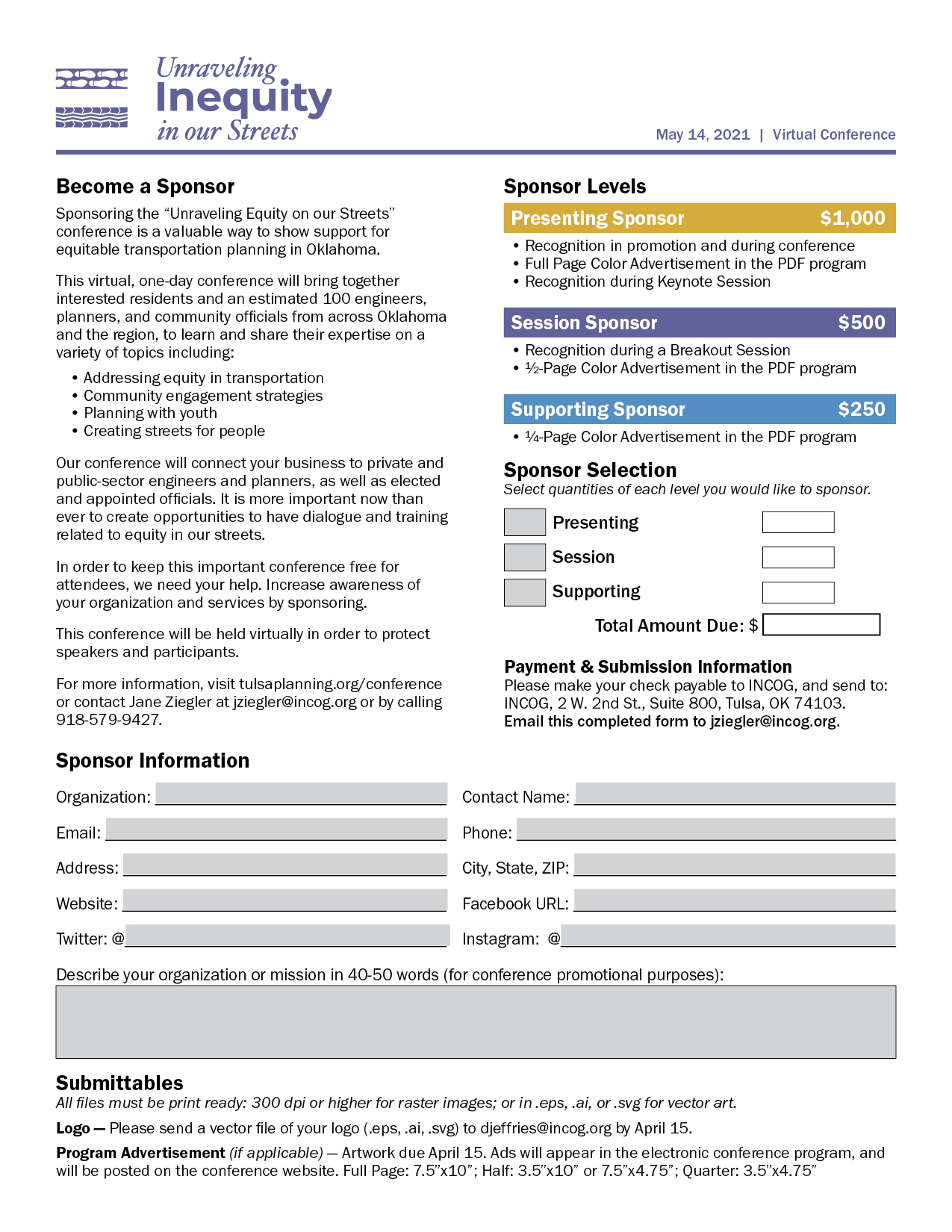